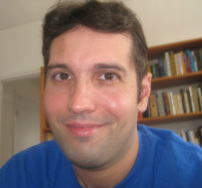 Mr. D. Tsoulos, MLS
I was born in the Bronx on July 15, 1972, and raised in New York City. I spent my formative high school years in Northern Greece where I attended the Pinewood International School of Thessaloniki. A lifelong enthusiast of the performing arts, I studied Theater and Film at Queens College (CUNY) and helped found the Wasted Potentials Theater Company in 1996. In 1998, I left New York City to attend the University of Southern California's prestigious Cinema and Television School. Go Trojans! I won a student Emmy award for producing the short film "A Cinnamon Roll Story" (1999) and participated on several other productions, most notably "Eliza" (2000), "Fresh Produce, Quality Meats" (2001), and the award winning short film"Casablanca" (2002). After receiving a Master of Fine Arts degree in Film Production, I returned to my beloved New York City to work in the film industry. At that time I also completed my thesis film, "Sweetie Cool Time". Since 2003, I have been teaching at Middle School 180 in Co-Op City, the Bronx. After receiving a scholarship from First Lady Laura Bush and the I.M.L.S. Foundation in 2008, I earned my third Master's degree in Library and Information Science from St. John's University in 2010. As a teacher librarian, I believe that life-long learning is the most important virtue in the attainment of a meaningful and adventurous life. In my time at M.S. 180 I have certainly learned more from my students than they have learned from me. I hope classes 605 and 606 continue in this proud tradition. I look forward to teaching all of you! Be bold in your thinking and dare to know new things, for complacency is the enemy of progress and the handmaiden of fear. Excelsior!